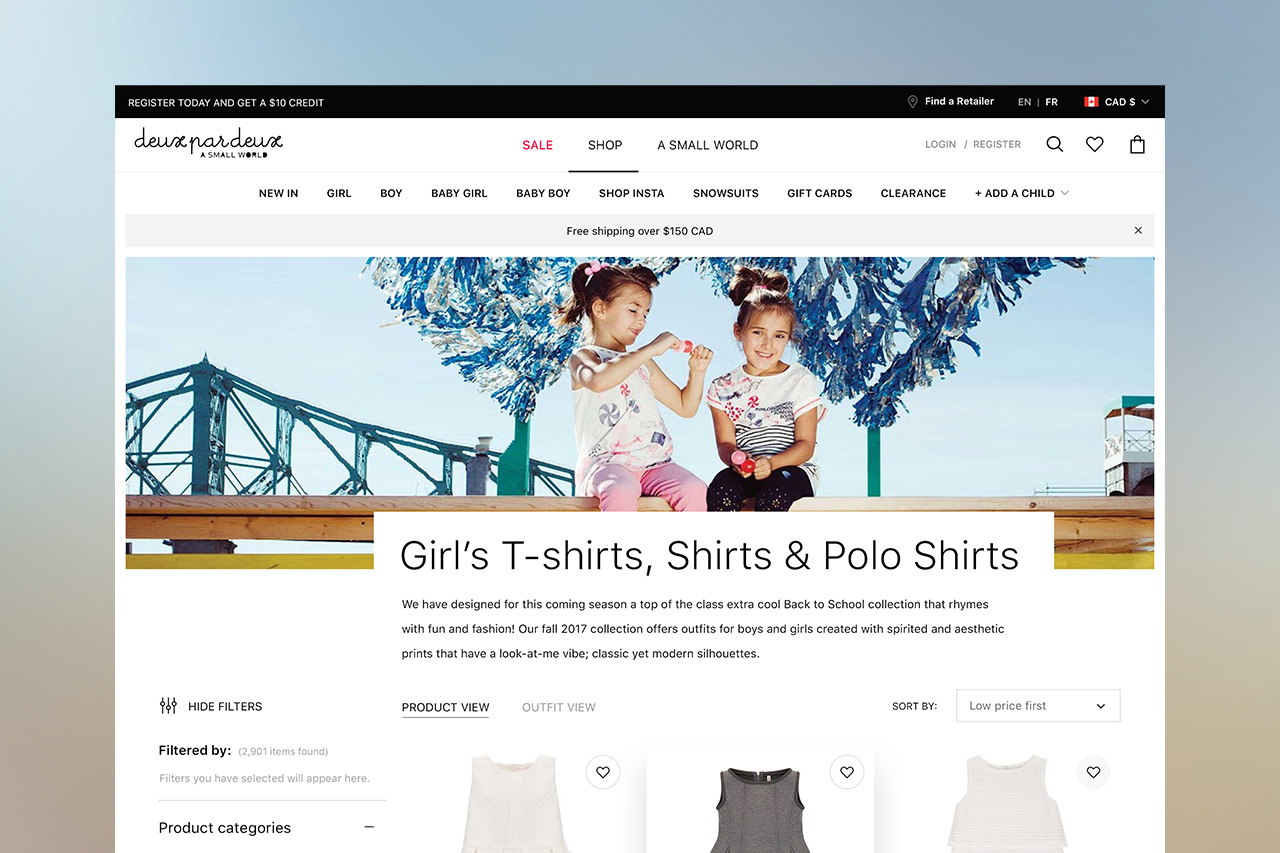 Celebrating childhood for nearly three decades, Deux par Deux has seen its one-of-a-kind collections travel from Montreal to New York, Los Angeles to London, and all the way to Moscow.

Upon its creation in 1986, the Quebec-based brand took the children’s fashion world by storm, setting the pace for its followers. With its stylish collections, sophisticated cuts, vibrant colors and original patterns, Deux par Deux immediately made its mark on the local and international scenes.

Deux par Deux is a meeting of two worlds, a happy marriage between bubbling creativity and keen business acumen. Cofounders Claude Diwan—current president and head designer—and Maurice Elmaleh form a couple in business and in life. These two citizens of the world set up shop in Montreal, which also became the birthplace of their two children, Zacharie and Elie-Jonas. Located at the seemingly magical meeting point of North-American and European influences, Deux par Deux has developed exceptional expertise over the years, combining the best of these two worlds to create its genuine signature of ultramodern, yet timeless fashion.

Season after season, Deux par Deux creates, manufactures and distributes original creations for infants from birth to 24 months of age as well as for children ages 2 to 12. Acclaimed by the industry for their strong technical and aesthetic qualities, Deux par Deux’s award-winning collections are, above all, celebrated and appreciated by the most uncompromising critics: kids! From tiny tots to youngsters who are well into the age of reason, children wear Deux par Deux with pride. Its unique creations have indeed been designed specifically for kids, who have always been the brand’s proudest ambassadors.

Not only do children have an amazing ability to surround themselves with beauty and pizzazz, but they also welcome style and elegance with open arms. By the same token, kids—not to mention their activities—demand comfort. This must-have trait represents one of the finest feats Deux par Deux has achieved in its clothing design.

Deux par Deux’s alchemy of fashion and style also stems from its tightly knit family. Our intensely inspired creators work alongside sharp and shrewd managers, forming a powerhouse team that puts its heart and soul into serving its customers, little ones and grown-ups alike.

Deux par Deux is the fruit of 10 000 days of creation and exploration, kilometers of fabric travelling all over the world, and an inexhaustible source of inspiration and imagination guided by the dynamic leadership of its president, who, though barely over 50, boasts nearly three decades of experience and original creations.

Deux par Deux has inspired many creators of children’s fashion over the years. Looking closely, one can see Deux par Deux’s signature and influence throughout the world. We take great pride in this, and it drives us to double our efforts and inventiveness with each collection in order to bring you the fresh new styles that colour your children’s world.

Deux par Deux is a uniquely special unit that travels the world for you and because of you. Thank you for inspiring and supporting us with every collection, for almost 30 years!

The first movie theatre was opened in Kyiv in 2008 and first in Ukraine featured the IMAX technology. Today there are 9 theatres with 49 cinemas in 6 cities of Ukraine. The Planeta Kino was always committed to bring to viewers the newest experiences and the best client service practices. It was the first cinema in Eastern Europe to release it’s mobile app and lunch ticket purchases online.

Crypto Bank. We are building bridges between crypto and fiat finance.